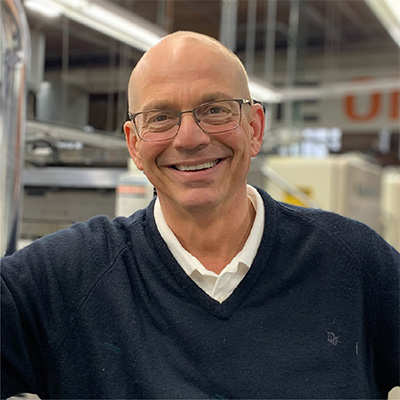 Dave joined Swift Print Communications in 2009 and has over 33 years of experience in the industry. Dave started his career in the customer service department of a flexo and hot stamp printer in 1987. After completing college at Mankato State University, he continued on in the flexo industry adding estimating and strategic planning to his talents. After 7 years of dealing with salespeople and seeing how easy it was, he decided to take the plunge into the sales and marketing arena where he quickly found that “it’s definitely not as easy as it looks”! Dave quickly caught on and along with his strong work ethic and his ability to build lasting relationships became one of the top reps.

In 1997 Dave made the decision to start his own print brokering business. His customers were small to medium accounts that couldn’t justify hiring a professional print buyer yet spent a significant amount on print. Being very driven and using his philosophy of honesty and integrity he quickly grew the company to the point that he’d envisioned. He at that point had all the skills needed to become a driving force at M&M Printing where he continued to grow his customer base or as he says “making friends”. Dave feels that to be a success one only needs to do the next right thing. With experience in all facets of print and his knowledge and background in marketing he has hit St. Louis by storm.

Dave is from Minnesota the land of 10,000 lakes and 10 months of winter and now lives in Creve Coeur with his wife and his dogs, Denny & Wilma. He has two sons; Scott 35 and Adam 34. His biggest achievement was being a good father and now a good friend to his kids. “They mean the world to me and I couldn’t be more proud of them!” He enjoys the outdoors and loves to hunt, fish and camp. His passion is helping others and he is a dedicated volunteer at the Salvation Army and other treatment centers around St. Louis.

Nickname: Rudy
Favorite food: Anything he doesn’t have to cook himself
Sign: Leo